The Paul Barret Library at Rhodes College recently acquired Shelby Foote's paper collection, including the personal journal's he kept as he wrote his epic tome, The Civil War.

I stumbled onto this C-SPAN interview this morning while doing some research, and it provides an interesting window into Foote's perspective on racial paternalism in the south.  Scroll to 10 minutes from a particularly interesting discussion of the white southern mentality.

Posted by Anthony C. Siracusa at 10:50 AM No comments:

Between games 2 and 3 of the Western Conference Finals, with the Grizz down 2 - 0 to the San Antonio Spurs, Geoff Calkins wrote a column as the best of 7 match-up prepared to shift to Memphis. 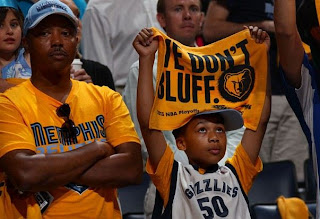 "Much of this is because of what happened on April 4, 1968. Walk over to the Lorraine Motel, stand before it, look on that wreath, and you can almost feel the sadness descend.

Memphis was a city of sadness, and of conflict and of flight.

Memphis was yellow fever and the sanitation workers strike. Memphis was an unruly river and ungodly heat.

This spilled into everything, into politics, even into sports. Have you ever heard of a city trying to fight off the arrival of a major-league team? A whole bunch of Memphians fought against the Grizzlies because they said -- this was the actual logic -- that the team would inevitably fail and leave.

Now those same Memphians have painted their faces and their toenails and possibly even their houses blue.

They have turned growl towels into neckties and have worn them to church. They are naming their dogs Z-Bo and Big Spain.

Calkins concluded: "Memphis is no longer a city of pessimists. Memphis is a city of newfound faith."

But how did the Memphis Grizzlies, a professional basketball team, so effectively help our city roll back the tide of grief and guilt spanning more than a generation to make such a profound civic attitude adjustment?  What was it about these guys, this team, and their work together that was so special?


On April 7, 1968 – Palm Sunday – the Reverend James M. Lawson, Jr. spoke to a crowd of 9,000 people gathered at E. H. Crump Stadium in Midtown Memphis.  Lawson had been a critical leader in the Memphis Sanitation Strike of 1968, and as he stared at the audience from a platform on the fifty yard line at Crump Stadium, Lawson’s voice rose with indignation.  He called the assassination of Martin Luther King “God’s judgment on you and me and upon our city,” and issued what turned into a self-fulfilling prophecy for the City of Good Abode:  “How can anyone have a good feeling about Memphis when one of the finest sons of this world of ours was shot down in her streets...And no matter how much we try, from now until there is no longer any written history, Memphis will be known as the place where Martin Luther King was crucified.”

Lawson had known King for years before inviting him to Memphis in the spring of 1968.  The two men had met in 1957 when King spoke at Oberlin College where Lawson was a student of divinity. Lawson and King sat beside one another at dinner that night, and they discovered they both had a deep interest in Mohandas Gandhi and, in particular, Gandhi's notion of satyagraha.


David Halberstam tells us that Lawson's wife, Dorothy, knew despite her husband's best efforts to publicly conceal his emotion, Lawson's grief over King's death was tremendous. "He would not be able to sleep," Halberstam writes, "and he would get up in the middle of the night and read in the Bible about the prophets, or do some writing.  There were times after King's murder when his grief was so great he wondered whether he could go on - there had been so much killing: John Kennedy and Robert Kennedy and Martin King and Malcolm X."

In the years following the assassination, Lawson often visited the man convicted of killing King, James Early Ray.  Lawson actually developed a relationship with both Ray and his fiance, Anna.  Lawson was long a staunch believer in the power of love and forgiveness, and despite the pain he felt over his friend's death, his relationship with Ray deepened over time.  One evening years after the assassination, just as the Lawson family was sitting down for dinner, Ray called James Lawson with a request: Ray asked Lawson to conduct the marriage ceremony between he and his fiance Anna.  Lawson was confounded by the request, and at dinner he asked his family what to do.  Lawson's son, John Lawson, told his father that if he truly believed in the all that nonviolence and redemption he had preached his whole life, he would marry Ray and Anna.

Indeed, John concluded, Martin King would have married the couple.

In October 2007, after being elected to his fifth term after a campaign centered on "Shake Them Haters Off," W. W. Herenton delivered victory remarks to a raucous crowd of supporters.

Herenton spent the first half of his speech thanking his supporters - both those conditional and un-conditional supporters - but he then turned his focus to the onslaught of criticism he'd faced.

The Commercial Appeal reported the second half of Herenton's speech this way: "'There are some mean people in Memphis,' Herenton said in a speech punctuated with hoots of approval from his supporters. 'They some haters. ... But I know about haters and I know about shaking 'em off.'  ... 'But what they (white people) want to say is, "How can Willie Herenton bring us together?"... I didn't separate us ... I don't have a problem. They've got the problem.'"

Columnist Wendi Thomas, non-plussed by "Shake Them Haters Off," called for alternative slogans for Herenton's campaign.

Cordova's Millie Askew contributed this one: "Herenton for Memphis, Home of the Movers and the Shakers. I'll shake while they move."

A funny slogan on the surface - except move they did.

Askew's slogan was a reference to Mayor Herenton's previous directive to Memphians who were critical of his leadership.  If you don't like Memphis, Herenton told his supporters, you can leave.

Hearing this as a college student in my early 20s, having grown up in a place recently described as the dirtiest city in the dirty-dirty south, it meant that I watched as many of my friends took Herenton's advice and left Memphis.

Memphis Magazine affirmed the flight of the young  in 2013:

Memphis has fallen four spots to dead last in the ranking of percentage of creative professionals — from #47 to #51 with a decrease from 5.2 percent to 2.4 percent.


Now, as the Atlantic points out, the struggle to capture the best and brightest is not always a race to the top.  And yet talent still matters.  At the very least, you don't want to encourage the talent you have to get the heck out.

***
On January 31, 2013, the Memphis Grizzlies traded "franchise player" Rudy Gay to another country.  The six-man swing-trade shipped Gay and his $82 million dollar contract to Toronto in exchange for Tayshaun Prince and Austin Daye from Detroit and Ed Davis from the Toronto.  The most scrutinized NBA trade of 2012-2013, the shift helped Memphis become a better team.

Gay was long and had capable of sexy dunks.  But as the New York Times reported, "...Gay was one of the most inefficient volume shooters in the N.B.A. this season. Among players with at least 1,000 field goal attempts, Gay’s .449 effective field goal percentage was the third worst in the league."

In plain terms, Gay took a ton of shots and few of them fell through the hoop.

Gay's departure allowed Memphis to open up its offense, spreading Gay's touches out across Mike Conley, Marc Gasol and Zach Randolph.   Conley ended up with a banner year following the trade, while Mike and Marc regularly went for 15 or 20 a night.

So Memphis, despite intense criticism, defied the superstar model in favor of a team based effort - an old school approach for an old school Coach in Lionel Hollins who put team over self.  This team-first message was regularly reiterated by the Grizzlies in their post-game press conferences and locker room interviews.

The Grizzlies, ultimately, decided to be the Grizzlies - not the team the critics and pundits wanted them to be.  And that means we didn't have a great offense; in fact, in the recently completed series against the Spurs, the team collectively shot below 39% from the field.

But even in their final losing games, the Grizzlies worked as a team.  And that's what makes this crew so special.  They embraced their faults - an inefficient offense and a spotty bench - but they also embraced their strengths night-in and night-out: a tenacious, league best defense; a slow and grinding half-court offense, and a tough - and I mean tough - set of players who were willing to bang inside all night long.

When the Grizzlies embraced their identity, the City of Memphis fell in love with the team. 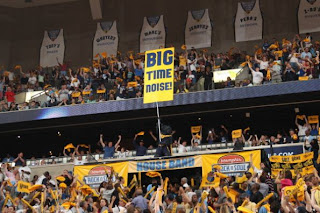 See, Memphis (both the Grizzlies and the city) did something especially significant this year.  It was an accomplishment with its roots sunk into years, flooded with muddy Mississippi River water and saturated by stifling heat and humidity.

It was an achievement that spans basketball and civil rights, that includes A C and W.W., and smells like a beer-soaked goat on a historic slice of street known for gambling, black-owned business, and ruffians.

To elaborate on Geoff Calkins point, the reason Memphis became a place of "newfound hope" these past couple years is because we finally decided to be us.  We decided to be Memphis.

We decided to embrace an inefficient offense, replete with Tony Allen jump shots; we also decided to accept our past rather than fight it - something we did in the living by gathering just a mile from where King was killed for regular civic celebrations at the grindhouse.

"I don't know if making it to the Western Conference Finals and having the best season in the history of the franchise is inspiration or a rallying cry for a city with fearsome problems," wrote Spencer Hall at SB Nation.  "I never know how much that means to a city, particularly one I don't call home. I don't know if the Saints really did help New Orleans accomplish anything by winning the Super Bowl, or if New York felt any better after 9/11 because of baseball, or if any storyline about a city and the very real business of professional sport helping it cope with life actually exists for the purposes of anything but well-edited inspirational ESPN montages. I'm skeptical about it because it's so easy to say, and easy things and Memphis don't really match up a lot."

This editorial resonates because we all know Memphis isn't easy.  And maybe that's why we Memphians resisted "doing us" for so long - because it wasn't easy.  But I think we're becoming more comfortable being known for "Whoop that Trick," the reinvention of once admonished players, and for the fact that "We don't Bluff."

"My children are being raised in a new Memphis," wrote Richard Alley, "one with possibilities imagined from the uppermost reaches of government down to the teacher in the classroom, from the 7-foot-1 defensive player of the year to the CEO to the waitress serving sweet tea."

Maybe it's a new Memphis.

Or, maybe it's the same old Memphis, just happy - for the first time in decades - to be who we are.

Posted by Anthony C. Siracusa at 4:02 PM No comments: