Minneapolis is on the Move

This morning, the USA Today published an article about commutes to work in downtown Minneapolis.   Inspired largely by the wait-time involved in car dense commuting corridors, the article focused on increasing incentives offered by employers whose commuters choose to bike, walk or bus to work.   The accompanying video has a couple nice interviews with commuters, including a bike-powered attorney riding into the office:
Because congestion alone often isn't enough for many commuters to consider an alternative to the car, many companies are developing innovative incentives to get people thinking about using the bike or walking.

Merete Wells, 25, a senior associate with the Minneapolis public relations firm Carmichael Lynch, takes advantage of an unusually creative option offered by her company: a 'shoe incentive.'  'They will give you $50 toward the purchase of a new pair of shoes a couple of times a year if you walk to work,' Wells says. 'It's a nice little incentive.' She used to drive to work from St. Paul. However, when her old Volvo started to wear down, she decided to move closer to work instead of buying a new car. Now, instead of a 30- to 45-minute commute in summer, which stretched to 60 to 90 minutes in winter, she walks 10 minutes to work.

Thrivent Financial for Lutherans, a faith-based financial services organization, is providing commuter rebates for employees that don't use the car:

Almost all of its 1,200 Minneapolis employees participate in the incentive program, which offers $50- to $100-a-month credits in pre-tax dollars, which the employees can use to pay for parking, a transit pass, and carpool, motorcycle, biking or walking costs such as shoes.

Good work, Minne.  Here in Memphis, we're aspiring to follow in your footsteps....quite literally.
Posted by Anthony C. Siracusa at 10:37 AM No comments:

Well gentle readers, I've made it safely back to Memphis...my home...this strange southern town long-filled with potential that now appears appears to be in a process of actualization.
Part of this actualization includes creating more space for bicycles on public roads.  A local advocacy committee, Walk Bike Memphis, has been working over this past year to update bicycle ordinances, create a bicycle pedestrian coordinator position within the municipality, and establish more on-street bicycle facilities.  Each of theses three campaigns have come to fruition in the past months.
For a full explanation of how the advocacy community has influenced local politics in Memphis over these last few months, have a look at my new blog, Community Powered Cycling.
Today's update deals largely with the first project in Memphis Mayor A.C. Wharton's 2010-2011 Bicycle Facilities Program: the Horn Lake Rd. bike lanes.   On Friday of last week A.C. promised to begin striping bike lanes on Monday morning (today), and sure enough, a quick trip out to Horn Lake Rd. showed new facilities in-progress.   Here the team is hard at work striping the new lanes--and being mighty friendly with courteous waves (which is something of a southern tradition, I might add.  Seriously, in all my travels I've never met people as nice as southerners.) 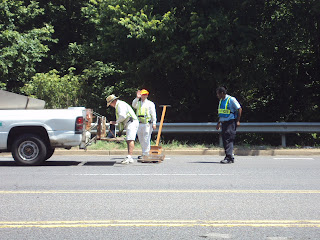 By the time I arrived around 3 p.m. this afternoon, the lanes were almost complete--and in use. 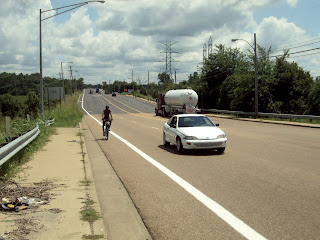 This gentleman was pumped when he passed me--smiling broadly and enjoying the 95 degree heat saturated with 100% humidity.  Welcome home indeed.
So how'd the City do?  Is the facility good, bad, irrelevant?  To find an answer we need to have a look at the lanes section by section.
First, the area we're dealing with is Horn Lake Rd. from the I-55 bridge on the north to Mitchell Rd. on the south.  Have a look at this map:
View Horn Lake Rd. Bike Lanes in a larger map 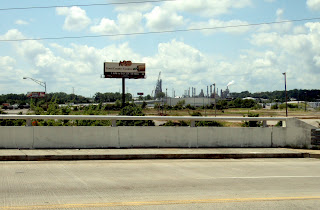 (A shot of the factory on the West side of I-55, or a common sight in this part of the dirty dirty) 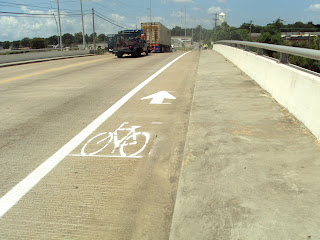 This shot was taken from the I-55 bridge facing north towards downtown.  It's fairly representative of the bike facility generally: the bike lane contains frequent bike emblems with a directional arrow between a 6 inch white stripe on the traffic side and a raised curb on the right side. The bike lane is accompanied by signs that say, shockingly, "Bike Lane."  Now, the lane is 6 feet wide throughout its entire length, which is a nice width...but there is small issue... 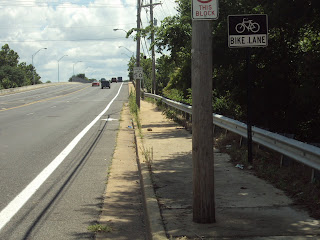 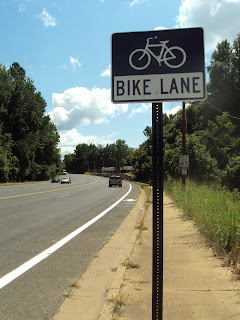 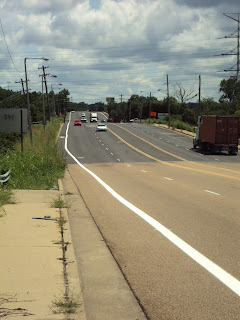 The 6 feet includes the gutter pan (the brownish color asphalt)...which is approximately 2 feet wide.  So, there is actually only 4 or so feet of bike lane on the asphalt-proper.  If two bikes attempt to ride two abreast in the lane, the far right rider will be forced to ride in the gutter pan. 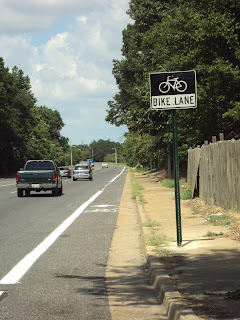 The narrow width also produces a second difficulty: the outside lane of car traffic is between 14 and 18 feet wide, meaning the traffic calming that often emerges from creating bicycle facilities is much less likely to occur on this stretch of Horn Lake Rd. because the cars have an incredibly wide lane outside lane.  If the bike lane had been made wider and the car lane reduced, its likely that significant traffic calming would have emerged. 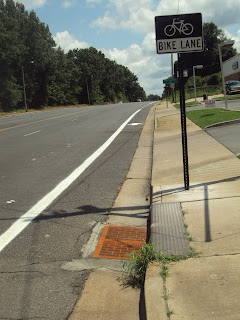 This photo shows three facilities created specifically for bikes on Horn Lake Rd.: a bike lane sign, a bike friendly storm grate, and a stripe separating the bikes from auto-vehicle traffic.  These are nice facilities, but there are a few places where more appropriate facilities should be added to the bike lane.
First, the junctures where auto-vehicle traffic merges from side streets onto Horn Lake--or primary conflict points between bikes and cars--currently has no facility. 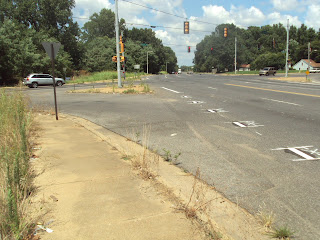 The hashed line on the right of this photo represents the bike lane boundary with traffic.  One easy way to improve the safety of this juncture is to hash the bike lane on the rider's right side and paint a colorful stripe to designate the bicycle's place in the juncture.  This picture provides an example from Victoria, Canada that could be applied here: 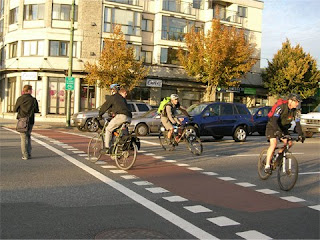 The second place where the facility can be improved is at the intersections.  Here, cars are expected to cross the bike lane when making right turns--as indicated by the hashed line. 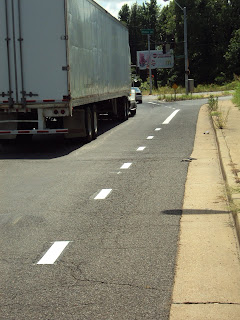 Here again, a painted stripe in green or blue or red could be used to alert drivers to the presence of bicycle riders.  This would also provide riders with a sense of comfort as they pass through a high-conflict juncture.  This is an example of a painted intersection from Eugene, Oregon: 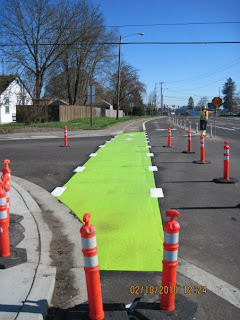 This is the intersection of Brooks Rd. and Horn Lake. 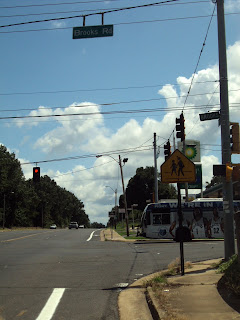 Here, the facility simply stops in advance of the intersection, the point with the highest potential for conflict between car drivers and and bicycle riders. And again, a painted bike lane could orient drivers and bike riders as they clear the juncture.
At this intersection we have a similar situation: 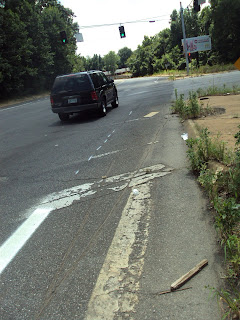 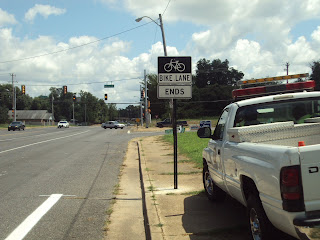 Finally, just before the intersection at Mitchell the bike lane just stops.  Now, we can only anticipate that this facility is the beginning of a longer facility that will connect communities to....well, something.  Anything.

But at the moment, the facility runs from the I-55 bridge to Mitchell Rd., meaning it provides no significant connectivity for community residents.  Future facilities ought to be planned with a strong focus on how the facilities connect people to places.  Otherwise, we'll simply end up with un-used bike lanes that go nowhere.

Here in Memphis we have an opportunity to make world-class bike facilities from the start, and though this is only phase one in Mayor Wharton's plan to develop bike facilities across the city, we ought to ensure that future lanes are developed with an eye to enabling the youngest, oldest and most vulnerable road users to comfortably  utilize the bike lanes.

On a side note, I had a very Memphis moment on my way down south.  I saw a car without wheels being towed with a iron link chain by a sorry looking red truck.  Upon first encounter, the car was fishtailing out of control (as tends to happen on cars without wheels?).  On my way back to downtown, I noticed the whole shenanigan had been abandoned--which provided me an opportunity to snap some photos.  Welcome home indeed. 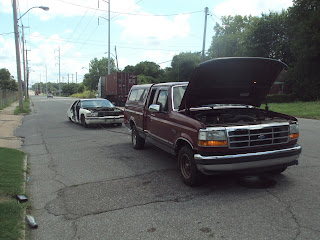 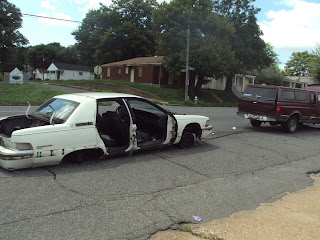 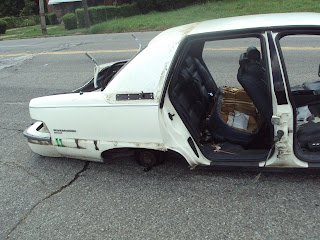 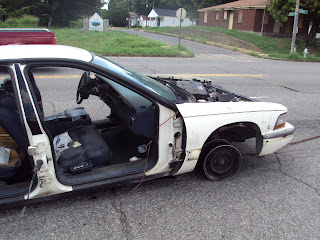 The video begins in the midst of my opening comments, but its still a nice documentation of the Pecha Kucha presentation I delivered at Velo city Global 2010...which, for those of you wondering what the heck that is, Pecha Kucha presentation are presentations based on 20 slides designed to automatically change every 20 seconds.  Essentially, the presenter carefully narrates a series of photographs.  Enjoy!
Posted by Anthony C. Siracusa at 7:31 AM No comments: